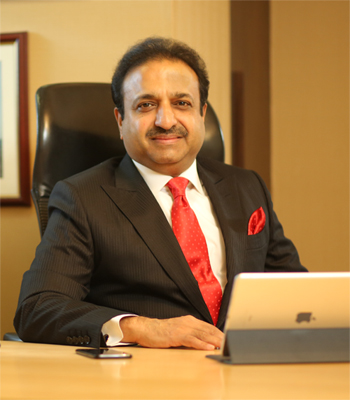 Mr. Sanjeev Agrawal, 55 years, Group Chairman, is one of the founder promoters of MMG Group other being his Late Father Shri M M Agrawal Ji

He holds a Masters degree in Commerce from the Kanpur University and MBA Degree from Coca-Cola University, Atlanta, USA.

He was instrumental in establishing the state-of the-art plant of carbonated soft drink under franchisee agreements with M/s Coca-Cola Inc, USA at Kanpur, Sahibabad, Greater Noida and Rourkela. He has been the brain behind establishing the group diversification and growth over the year. He has been instrumental in the group diversification by creating business interest for the group in areas like, Hospitality, Education, Oil & Gas (Service provider to ONGC), Food and Beverages.

He started his professional career as a Director of Superior Fabric, Kanpur under the valued leadership and guidance of his father Late Professor M.M Agrawal Ji who was also elected to the upper house of the Parliament (Rajya Sabha). The company at that time was mainly engaged in supplying various merchandise to the Defence services and thereafter working steadily he has been able to create the various business verticals and the Flagship MMG Group. Apart from being an astute businessman, he has also ensured that his social responsibilities are fulfilled as right from the beginning he has taken active interest in activities that were related to servicing the downtrodden of the society. Firm believer of “OUR COUNTRY HAS MORE TO GIVE ESPECIALLY WHEN IT COMES TO WORKING WITH YOUR HEART”, he has been passionate when it comes to getting things done for the needy. As a result of the above, he has successfully organized several camps pertaining to polio, health care, eyes, TB, AIDS etc.

He has taken active part in various political, social & cultural activities in the country and in Delhi local area. He has been interested in organizing seminar on social-political-economical topics involving people from all walks of life particularly, SC, STS, OBC, Minorities and other impoverished sections of the society. Welfare of the poor, down trodden and other backward classes. He has been author to several articles in newspapers on political, social and economic subjects for the welfare of the economic and political development towards India’s unity and integrity.

Mr Agrawal Ji belongs to a renowned freedom fighter family which was deeply involved in the Freedom Movement. His father Prof. M.M Agrawal Ji was a well known educationist, industrialist and a philanthropist who was actively involved during the freedom struggle and also participated in the Barat Chodo Andolan (Quit India Movement) under the leadership of Mahatma Gandhi.

Prof. M.M Agrawal Ji was elected to the Rajya Sabha from the State of Uttar Pradesh and during his tenure he was also serving as the Member of the Parliamentary Standing Committee on Industry, also the Convener, for the Ministry of Small Scale and Agro & Rural Industries.

He was also the Member of the Consultative Committee for the Ministry of Health and Family Welfare and the Ministry of Petroleum and Natural Gas and also Executive Chairman of World Federation of United Nations Association, Geneva elected in Plenary Assembly Session in Ottawa (Canada) for two years.

Mr. Sanjeev AgrawaI has worked along with his father wholeheartedly, industriously and sincerely throughout the country. It is Mr. Sanjeev Agrawal’s heart-felt desire to work for the welfare of people in the national interest on the same line as being done by his late father.

Some other key positions currently being held by Mr. Sanjeev Agrawal are: